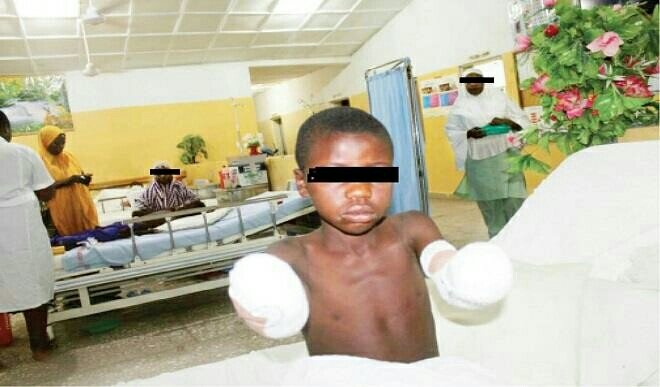 A 13-year-old boy Zubiru Yusha’u from Gombe State in Nigeria, purportedly stole a phone. His proprietor tied him up and left him in the sun. By the time he was released, his hands were swollen and infected. He was taken to the hospital and the end result was that his hands, both had to be amputated to prevent the infections he had from spreading any further to other parts of his body!

Here is the account if you do not believe this.

Now the point is this: the boy did take the phone, thinking that it was abandoned, even if he did steal the phone, which is definitely wrong, was the punishment that resulted in his losing his limbs a fair consequence for his wrong doing.

Discipline is very important in the lives of all human beings. Adults with parental rights or with the duty to care for a child must teach, train and correct children so that they would learn what is right from what is wrong.

We must discipline with the end in mind and not out of anger or a self-righteous indignation. Discipline does not work when the main goal is to punish the child for wrong doing. I know a lot of us may disagree and say that a child who is not punished for their wrong doing will never learn. You are right that action should be taken but the action that is taken is what I disagree with.

Look at what happened in this case: the child stole a phone, his punishment was to get tied up with a rope and be left in the sun for a couple of hours. The end result, amputated limbs! Is this discipline?

Punishment usually inflicts pain and fear. The fear of punishment may prevent a child from doing something that is wrong, but I must tell you it is not an effective way to train a child. Instead do this:

Help children to understand that the choices they make always have a consequence. How do you do this? It must be intentional and encompass everything they do. Let me give you an example. Let’s say a child at one and a half years, is pouring water into their cup, they make a spill, show them how to clean up the spill. When it happens again, get them to clean up the spill. This is action vs consequence. They make a mess they clean it up. To start with the messes are just errors, mistakes.

The lesson is simple, ‘I spilled water on the table, it made a mess, I must clean it up’

Now if you child throws a tantrum at 2 or 3 and makes a mess, they know that they have to clean up their mess, once they’ve done this once or twice you will see that the tantrums will reduce because they know what work they have to do afterwards.

Another example is playing with their toys: get them to learn to clear up after themselves.

Lesson: ‘I played with my toys, the room is now untidy, I must clear it up and leave the toys in their right place.’

If the child now refuses to put the toys back, maybe because he wants to test you or just be cheeky, fine. You could inform the child that he would not be allowed to play with the toys next play time. This usually does the trick for most, they will do the clearing up. If he doesn’t don’t fret, keep to your word though and do not allow the child to play next play time. You will get a teary eyed child, sorry and apologising. You will see it wont happen again.

What if it continues to happen and the child is not getting it? If per adventure it does not stop you can add some extra consequences but always make sure that this is in line with the misbehaviour.

This brings me to the issue of stealing: the child actually returned the phone or told them exactly where the phone was immediately he realised that the issue was not considered an abandoned phone but a stolen one. So what could the proprietor have done to help the child understand that taking abandoned items without verifying the actual status of the item is wrong? The use of appropriate consequences should be figured out and used in this case.

Why appropriate? Well this is because, the consequence of stealing the phone apart from the shame of being called a thief, cannot result in natural consequences like the examples above. You have to think outside the box and come up with a set of actions or one action that is commiserate with what the child has done. If you read the story you would realise that the child though not an orphan was basically living like one. Begging for food on a daily basis with no constant parent figure to guide him. He was basically a street child trying to survive! So what could our proprietor have done differently?

To be honest with you, I would have been hard pressed to find an easy answer. He in hindsight saw the error of his actions and pleaded with other educators to be patient! In this boys case he needed help and not punishment.

For other children in better circumstances though, I would suggest making them work to save up to buy a phone. It may take them over a year to accomplish this. Believe it when I say, he wont take what belongs to another without asking again!

Have you had to shout and flog a child to get the desired learning outcome?  If you have do you think that punishing, flogging and shouting at them has been effective?

The sooner we realise that the reason our country is constantly in the hands of incompetent leaders is because they have not learnt to make the right decisions for the right reasons. They do not realise the consequences of their actions, neither do they care. The time to help children learn to care and know that each choice/decision they make has a good or bad consequence is now in the early stages of life. They are not going to suddenly get it when they get older. They need time to get this and work on themselves to gain the self control and self discipline to make the right choices.

This has not happened with most of the older generation that is why they steal from the coffers of the state, lie to the masses, promise mandates and don’t deliver!

How many of us can say that if we were in power we would not do the same? Even the majority of us who complain would not dream of going into government because we do not have what it takes to stand up for what we know is right!

You know that this is true.

So moving forward, please let us do away with the cane, with shouting and flogging children into submission, let us stop this physical abuse and torture of our children in the name of discipline. There is a way forward and it requires love, patience, intentional parenting and guidance of the next generation.

I believe that the Montessori method provides a better insight on how to help our children live right and in peace, serving humanity and not stealing from it. We must use the freedoms we give our children as a tool to help them gain self-control and self-discipline. Freedom that has limits but produces love and self confidence is what we need. Freedom that has consequences embeded in all we do. Is that not what life is all about?

No more should punishment be the buzz word it should be consequences. These consequences have to be in line with the offence. Once the child understands the role of consequences in the choices they make most of the battle is won!

Zubiru Yusha’u’s hands are gone! How many more children must be maimed before we learn that disciplining a child does not need punishment that instills fear in the child, or abuse that dismembers them? Let us get it right and do right by our children. Let’s teach them about consequences now.